‘‘Twas the night before Christmas

Santa’s beard was a mess

It looked like he’d been stuck in the mountains I must confess,

Before he took to the sleigh, he had to shape up his beard,

The elves knew of something made by WWL Beard,

They heard of our products, Surfs Up & Sweet Whiskey,

The scent of it would make Mrs. Clause a little frisky.

The elves asked us to create a very special blend,

One that they could give a dear bearded friend.

So we worked in a flash to come up with a smell,

One that would capture a Christmas tree and the scent of Noel.

Relentlessly working we came up with a plan,

We added some cedar, pine & fir, the smell of a man.

We added some nutmeg,some spruce and some musk,

We had it completed by Christmas Eve Dusk.

Last but not least we had to give it a name,

So in West Virginia at Headquarters we got back to business,

We decided to call it none other than “Father Christmas”

The elves hurried back just in the Nick of time,

With oil and balm in his beard in his sleigh he did climb.

But we heard him exclaim, ere he drove out of sight

Merry Christmas to all, and to all a bearded night!

Apply as needed to condition your skin from within while leaving your beard feeling refreshed & manly.

I've the product, it was awesome , my wife love the sent. Keep it ,it,s a winner 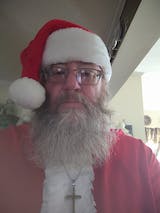